Why was this new database option introduced?

LocalDB was introduced primarily as a replacement for the outdated Microsoft Access database format. It comes packaged with the Promodag Reports installer and is therefore easy to set up. We decided to phase out Microsoft Access for multiple reasons:

You can create a new LocalDB database using the Configuration Wizard the first time you run Promodag Reports or using the File > New Database option.

Your SQL instance name under LocalDB is (localDB)\Promodag.

The default path to the data file (.mdf) and transaction log (.ldf) of the database is C:\Users\Public\Documents\Promodag\Databases\. This path can be modified manually using the … button.

You can connect to your LocalDB instance using SQL Server Management Studio (SSMS), though only locally from your Promodag computer (or console). The Windows user that performed the installation of Promodag Reports has access to your LocalDB instance by default. Since SSMS allows you to launch custom queries and perform maintenance or troubleshooting tasks as needed, it is recommended to install it. 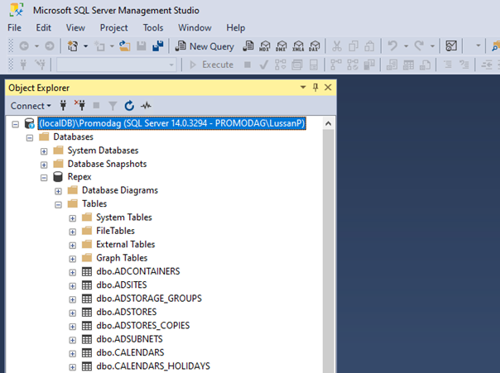 The introduction of LocalDB is a positive change that should enable users of the Standard and Professional editions of Promodag Reports to import data covering a longer period of time, make database maintenance easier and more reliable, and allow a seamless transition to SQL Server should the need arise. We recommend that all Access database users opt for this new database format in version 12.