Those of you who use Exchange Online have probably regularly wondered – and have no doubt been asked many times- if all distribution lists were still in use. After a couple of months, more and more groups get created, some of them stop being used, others are simply forgotten; following up and maintaining all this by performing regular cleanups is both a never-ending and time-consuming job.
So, how can you generate a report on distribution group usage statistics that would ideally show the number of emails sent to each distribution group in Exchange Online, and who sent them?

Regrettably there is no precanned report in the Office 365 Admin Center to analyze the utilization of distribution groups in Exchange Online, and so you will have to run a script based on the Get-MessageTrace command. Unfortunately, the resulting reports are not very detailed: they do not display the email senders, let alone the subject line of the message. Moreover, the live message tracking logs only contain a few days’ worth of message tracking events within Office 365. In any case, running a historical search would not be a very good idea - as the number of searches is throttled.
Reporting products that use the same PowerShell cmdlet would suffer from the same limitations and should be best avoided. What’s left?

Ideally, it should be possible to report over a period much longer than 7 days, and to see where those emails come from. Promodag Reports combines both these features and more.
Our reporting tool imports the content of message tracking logs into a database. On top of that, Promodag Reports can also pull message tracking events from Office 365 and store them as ‘regular’ tracking logs!
Once you have imported your tracking logs, all you have left to do is to adjust your reporting period - and then select the detail level of the Distribution Group Usage report to display the originators of messages sent to groups. If you have imported one year’s worth of tracking logs, then you will be able to report over an entire year and not only the current week. Last but not least, the report will be generated way faster.

You can either get a summary as below:

Or a more detailed report displaying the names of the senders of those emails. 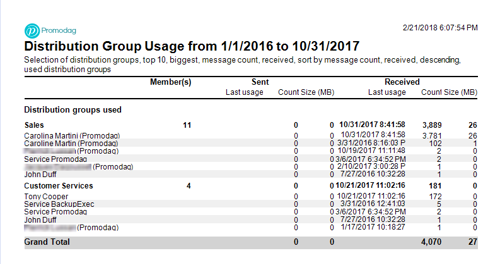 It is also possible to only list distribution groups that have not been used within the reporting period.

And the winner is...

If you need to list the distribution groups that are really used in your organization, Promodag Reports turns out to be a much better solution, both in terms of execution speed and detail level.

Promodag Reports provides by far a much better way to get distribution group usage statistics for Office 365. If you have read up to this point, you may want to try it yourself. Good news, we offer a 45-day free trial, so go for it! We are happy to receive your comments and suggestions, so please do not hesitate to contact us.